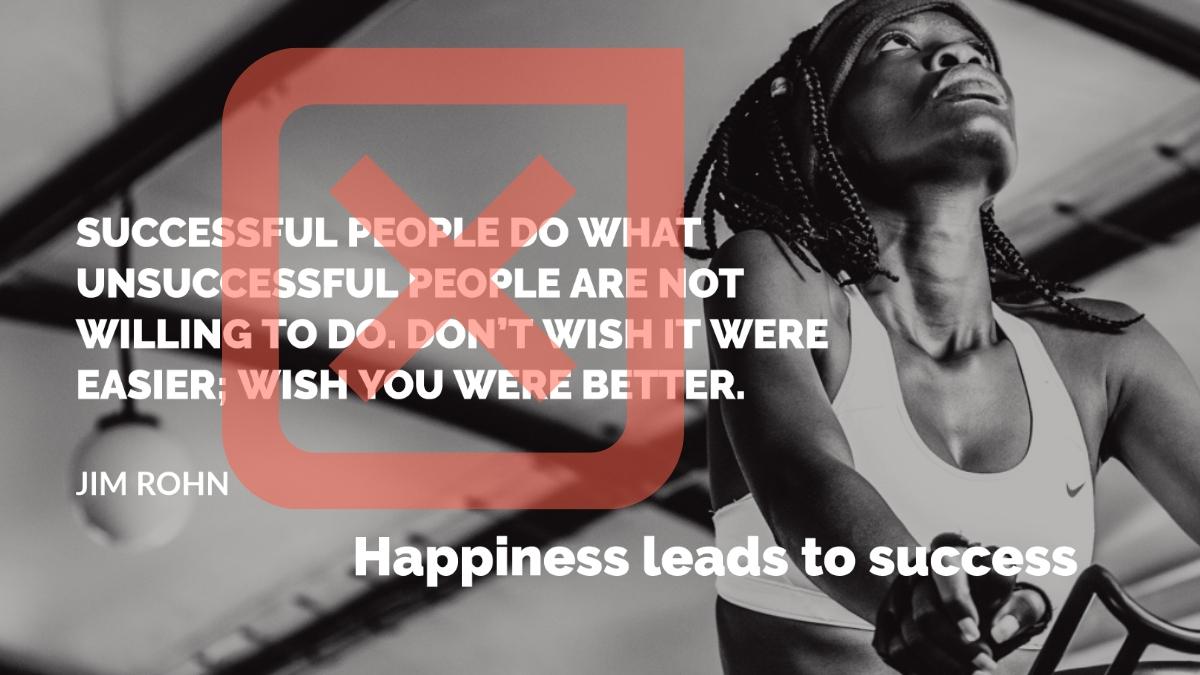 The popular notion that success can be defined as "attaining wealth, prosperity and/or fame" has been successfully debunked by recent studies. And likewise, the idea that success brings happiness, has also been discredited.

"It's an age-old assumption: Success, whether in school, work or relationships, causes happiness. Many of us strive for success, putting long hours into our work or studies in the hopes of achieving success and, as a by-product of that success, happiness."

A review of 225 studies in the Psychological Bulletin found that happiness doesn't necessarily follow success. In fact, it's just the opposite. Happiness leads to success.

Sonja Lyubomirsky, Ph.D., of the University of California and colleagues reviewed three types of studies: those that compare different groups of people; those that follow individuals over time; and those that examine outcomes in controlled settings.

According to the study's findings, happy people seek out and undertake new goals that reinforce their happiness and other positive emotions.

The results from all three types of studies suggest that happiness leads to greater successes in life.

Lyubomirsky suggests, "this may be because happy people frequently experience positive moods and these positive moods prompt them to be more likely to work actively toward new goals and build new resources. When people feel happy, they tend to feel confident, optimistic, and energetic and others find them likable and sociable."

Other factors also contribute to success, including intelligence, fitness, social support and expertise.
(adapted from https://psychcentral.com/blog/does-success-lead-to-happiness#1)

Shawn Achor, founder of the corporate strategy firm Good Think, also argues that we've got it backward. In the work Achor has done with KPMG and Pfizer and in studies he's conducted in cooperation with Yale University's psychology department, he has seen how "happiness actually precedes success."

Hall suggests three key areas that are becoming more integral to the idea of success:

1. A Healthy Mindset
There's a clear difference between a person who's confident in her path and content with her life and someone who's made a ton of money but allowed the pursuit of it to take a toll.

2. Respect in Your Career
You might make a ton of money, but if you treat people badly throughout your career, your success will be pretty shallow (and probably short-lived). Successful people understand that the example you set matters.

3. Surrounding Yourself with Solid People
Part of having a successful career is being able to share the journey with others. Psychiatrist Robert Waldinger, in the 80-year-old Harvard study about the relationship between your sense of community and your health, said "Loneliness kills. It's as powerful as smoking or alcoholism."

"Too many people measure how successful they are by how much money they make or the people that they associate with. In my opinion, true success should be measured by how happy you are."

"To live the lives we truly want and deserve, and not just the lives we settle for, we need a Third Metric... A third measure of success that goes beyond the two metrics of money and power, and consists of four pillars: well-being, wisdom, wonder, and giving."

"The measure [of success] is whether the people close to you are happy and love you."

"Success in life could be defined as the continued expansion of happiness and the progressive realization of worthy goals."

"For Barack, success isn't about how much money you make. It's about the difference you make in people's lives."

"I learnt very early on that negative energy is a black hole, and if you want to waste yours go jump in it. I just absolutely don't engage in that kind of totally useless one-sided negative criticism":

And I remember saying,
'I'm really good at embroidery doesn't that help?'

"The dynamic nature of Australia's social and economic environment is reflective of the changing attitudes of Australians towards success. While success means many different things to different people, it is heartening to see Australians are viewing success more holistically and not just in monetary terms."

Success is often considered to be the opposite of failure - the status of having achieved and accomplished an aim or objective. However, real and sustained success is more likely to be attained by a happy person than by someone using success as a means to find happiness.

And as much as you may attempt to compartmentalise your life into business success, personal pursuits, maintaining health, family and friends - no aspect of your life can ever be separated from the others.

"Happy individuals are more likely than their less happy peers to have fulfilling marriages and relationships, high incomes, superior work performance, community involvement, robust health and even a long life."

HAPPINESS - Why Should We Believe Hilda?
World Happiness Ranking

What Communication Style Do You Use?

What Kind of Learner are You?

How does the dream turn into a scream?