HAPPINESS - Why Should We Believe Hilda? 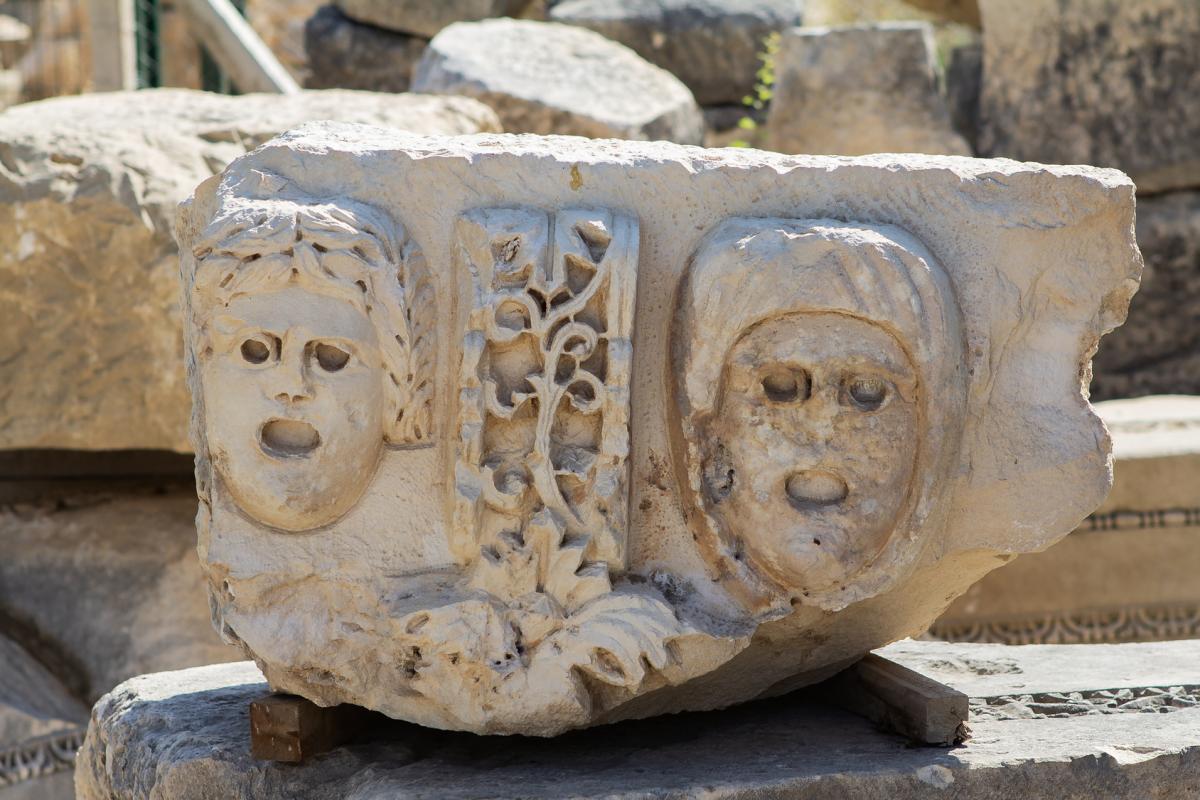 HAPPINESS - Why Should We Believe Hilda?

The World Happiness Report 2019, a United Nations survey of 156 countries, reveals that Australia's world happiness ranking has dropped from 10th to 11th place. According to the survey, Australians rank their happiness 7.23 out of 10.

Australians report the top 5 causes of stress that can lead to unhappiness as:

Social media, lack of face to face contact with others, lack of exercise in natural environments, work pressure and feeling like life is meaningless are some of the reasons 18-24 year olds feel unhappy and consequently appear as the most stressed group. 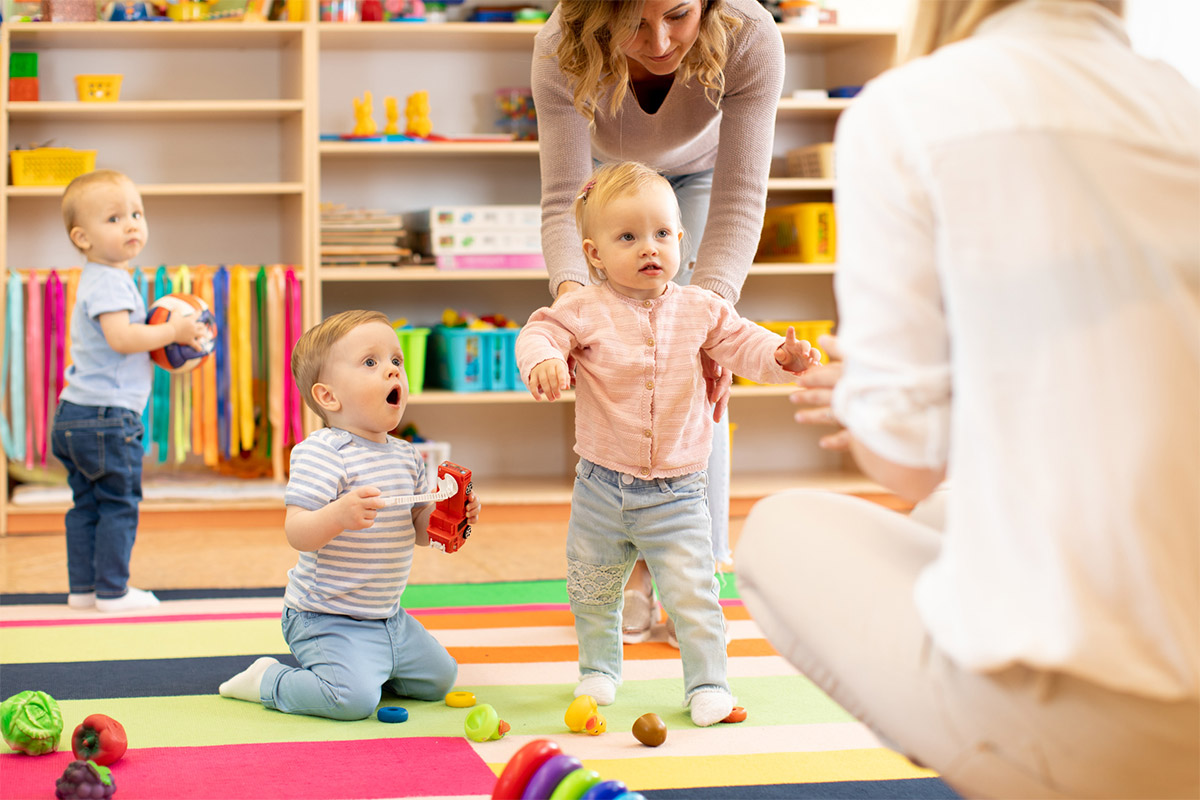 The second most stressed group, 35-49 year olds, claim that juggling children and ageing parents are key drivers of their unhappiness, while those over the age of 65 "emerge as the least stressed of all Australians."

According to HILDA, some significant elements that affect our happiness, health and relationships also include our work hours; time spent commuting to work; feeling part of a local community; a salary commensurate with our partner's salary; good work-life balance and work-family balance; and an appropriate amount of free time.

HILDA is the Household, Income and Labour Dynamics in Australia report based on the data collected in a survey by The Melbourne Institute of Applied Economic and Social Research (University of Melbourne).

Commonly referred to as 'The Melbourne Institute', this research centre was formed under the leadership of Professor Ronald Henderson in 1962 as 'The Institute of Applied Economic Research'. It was the first economic research centre in any Australian university.

Professor Peter Dawkins took up the position of director of the institute in January 1996. In that year, the name of the institute was also changed to Melbourne Institute of Applied Economic and Social Research when Professor Dawkins and his senior management team, in association with the staff and the advisory board, developed a strategic plan with the unifying theme being the link between economic performance and social outcomes.

HILDA is a longitudinal study in that it surveys the same group of Australians over their lifetime. HILDA polls individuals on issues such as family structures, income, work, health and lifestyle. The most recent report published on 23 July 2019 contains the survey results collected in 2017 and seeing, is believing.

Professor Roger Wilkins, co-author of the latest HILDA report, has tracked 17,500 people in 9500 households since 2001.

"Major life traumas such as separation, job loss, illness, disability and death of a loved one obviously have a big impact on happiness, though Wilkins notes that humans are remarkably resilient and tend to bounce back relatively quickly."

HILDA statistics reveal the average commuting time to get to work has increased for Australians since 2002 from 3.7 hours a week to 4.5 hours per week. A long daily commute makes workers less satisfied with their job and pay and they are more likely to quit. 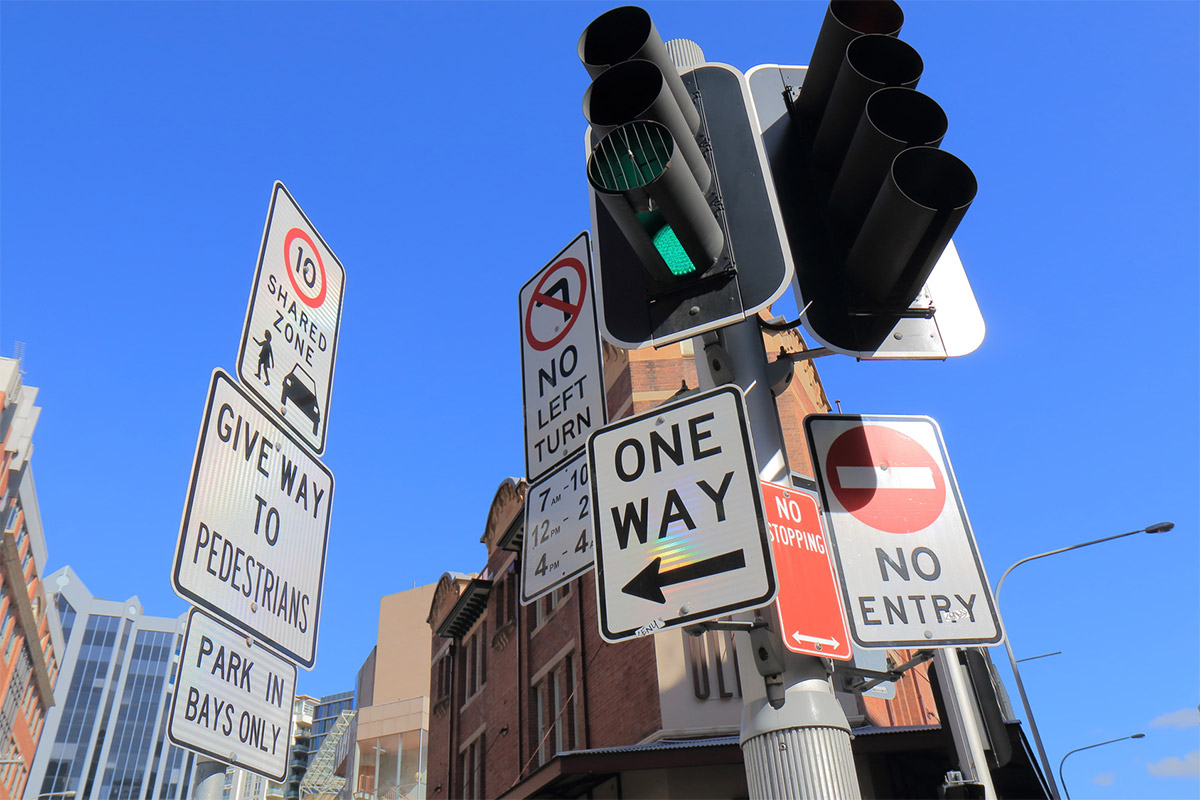 Sydney has the longest work commute times at an average of 71 minutes per day, followed by Brisbane (61 minutes), Melbourne (65), Perth (59) and Adelaide (56).
A two hour plus daily commute strains the work-family balance which is a key factor in the happiness equation e.g. being able to drop children to school each morning.

Professionals, managers, "tradies" and administrative workers are most likely to face 2 or more hours of travel per day. Men are more likely than women to have longer commutes, especially fathers with dependent children. Tradies are turning to professional bookkeepers to take the stress out of managing their business hours due to longer commutes between jobs.

A Gold Coast Pest Controller has had to adjust his range of suburbs he services due to the time lost in traffic, no matter how good his Time Management Skills.

Overcrowded (and unreliable) public transport, expensive car-parking and increasing fuel costs have seen a greater desire in workers to cycle or walk to work.

There has also been an increase in the number of adults who work from home in a family business or professions such as legal services, thus avoiding the commute to work.

The number of women in a couple who are earning more than their partner has risen from 22% to 25% since 2002. However, the average earnings of a male 'breadwinner' are $108,000 per annum while a female "breadwinner" earns $74,000. In a female "breadwinner" household, males are now spending 2 hours per week more on housework and childcare than in 2002.

The employment rate for mothers has increased to record levels of 71% while the previously significantly higher scores for fathers has dropped, coinciding with a rise in work-family conflict.

HILDA confirms that a major point of dissatisfaction for couples with children is the substantial increase in formal childcare costs that have risen 145% in real terms since 2002. This comes at a time of stagnation in household disposable income which has been weak since 2009. Parents are therefore often working longer hours to pay for childcare which in turn increases the number of hours their children require care.

Parents maintain that having to work 55 or more hours per week means:

Young Australians, 18-29 years, are staying at home longer. In 2001, 47% of males and 37% of females lived with their parents. In 2017, the figures climbed to 56% and 54%. At the same time, parents who have older children and children who have moved out of home, associate this move with lower work-family conflict scores and a rise in satisfaction. 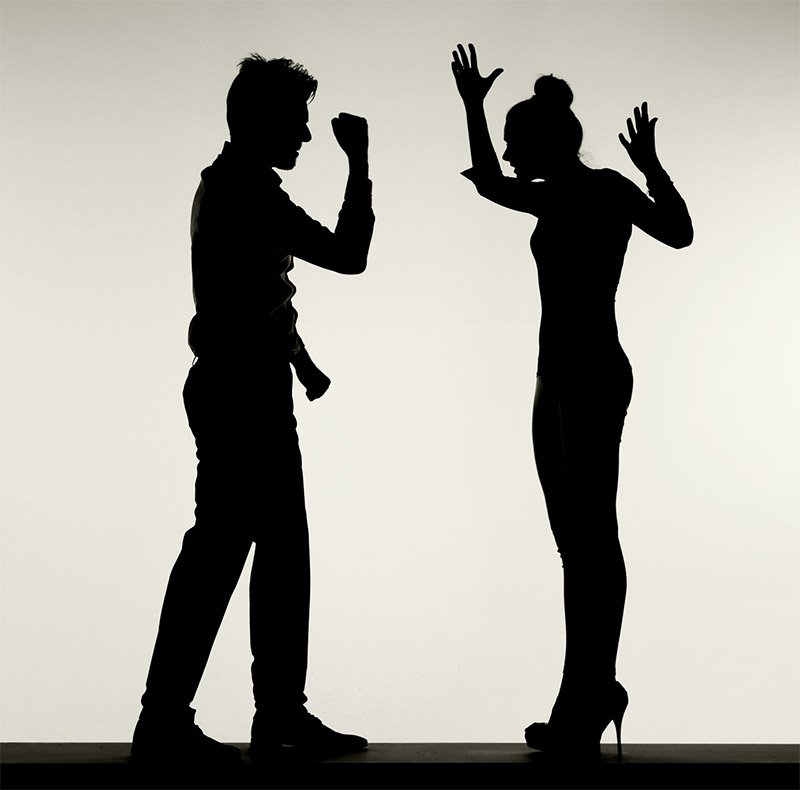 Work-family conflicts lead to lower satisfaction levels and a greater risk that a couple will separate. Couples who report high work-family conflict separate within the next year compared with 1.6% separation where both partners have low work-family conflict. An experienced couples therapist "can help identify the reactive patterns and triggers that are present in your relationship" perhaps using mindfulness techniques to help a partner "take a minute when you arrive home (turn off the car) to become present so as not to take baggage home to the kids".

HILDA maintains that couples with or without children are happier than singles and they have better health and mortality expectations than single people and single parents.

Across all ages women reported higher rates of depression and anxiety than men but women are more likely to present to health providers than men which may skew the results. Woman are more likely to seek help from a clinical psychologist or a marriage counsellor or enquire about couples therapy retreats or look for a Naturopath to help their "physical, mental, emotional and spiritual wellbeing." 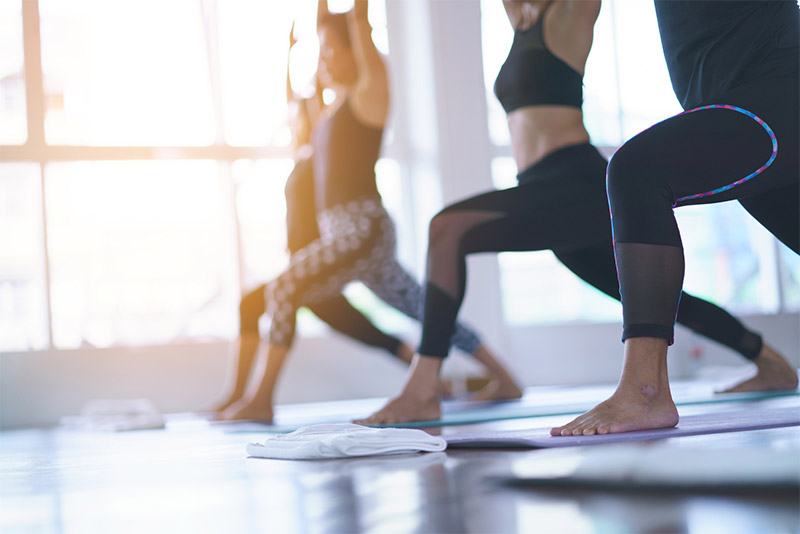 Yoga is an ancient practise that helps people achieve a natural balance. A Yoga class is usually designed around removing thoughts of your daily life, breathing in the present moment and learning to centre yourself.

Other serious illnesses in the HILDA survey included, asthma and cancer.

HILDA revealed that with the rise in life expectancy and confidence about living beyond 75 years, even people with poor health are more optimistic about the future.

Lack of job security can erode job satisfaction and cause stress. HILDA breaks down the types of work contracts males, females and certain age groups and other demographics are likely to be employed under.

61% of female workers are in 'non-standard' employment such as temporary, part-time and casual work compared with 37% of male workers.

HILDA found that casual contracts among all ages had declined except in the very young. For instance, 65% of fulltime students and 74% aged 15-24 years are on casual contracts while workers aged 25-34 are more likely to be on fixed term contracts.

HILDA suggests that with the economy's current industry mix following the decline of manufacturing in Australia and the rise of education and training, highly educated professionals may find fixed-term contracts more relevant to their professions and the job mobility they desire.

HILDA informs us that those living in regions are more satisfied than city dwellers in certain aspects of life.

Couples who moved outside cities to regional areas reduced their work commute stress if they gained local employment. However, they also reported a more "muted social life" and compromised household income (which stalled or even went backwards).

Households in the sea-change and tree-change hotspots of Torquay, south-west of Melbourne and Bundeena, on the southern edges of Sydney, have reported at least one wage-earner in the household travelling more than an hour each way to their place of work, thus potentially compromising their free time and work-family or work-life balance. 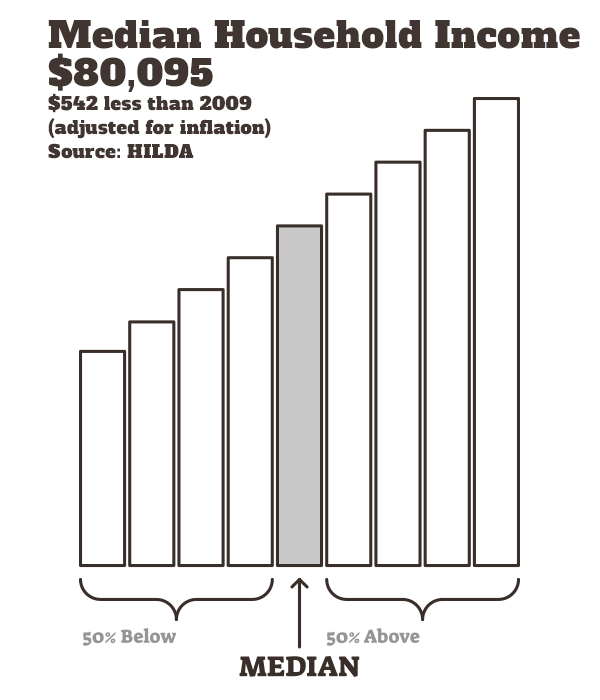 HILDA maintains that income increases averaged $3000 per year between 2003 and 2009. However, household incomes have stagnated after years of weak growth and in real terms are worth less now than a decade ago. The study reveals that median household income is $80,095 per annum, down $542 from 2009 when adjusted for inflation.

However, Professor Wilkins maintains that 'Financial stress is as much about how you handle your money as about how much money you've got."

Poverty in Australia has also started trending upward in the past 2 years despite more than a decade of trending downwards.

Poverty in Australia has also started trending upward in the past 2 years despite more than a decade of trending downwards. The proportion of the Australian population below the poverty line (50% of median income) is now at 10.4% compared with 9.6% in 2009.

The HILDA report concluded that improved living standards among the poor "had not been maintained" since 2009.

The Age of Happiness

"Teenagers and those in their 20s start off reasonably happy but steadily become more depressed until they hit 40, according to a review of global research by The Economist " (April 2019).

Hitting middle age seems to improve happiness and at 40 years our sense of happiness begins to recover. By 70 years, we feel just as happy as we did as a young person.

Professor Wilkins suggests, therefore, we should focus on leading a full life:

"We don't just live life to be happy but to experience the extremes of everything life has to offer - the full emotional spectrum."

HILDA is the Word

In terms of our National happiness, perhaps the next time an Australian Prime Minister claims the Government are "good economic managers" and suggests that the way to earn more money is to "work harder", we may want to burst their Canberra bubble by referring them to HILDA for a reality check and point to the incontrovertible statistics contained in the Melbourne Institute's 2017 report.

If governments can be made to understand the link between economic performance and social outcomes and their policy-makers encouraged to take positive action based on that link (rather than regurgitate glib two and three-word slogans) our political leaders may even assist us in bringing Australia and Australians back into a Top 10 ranking in the next World Happiness Report.