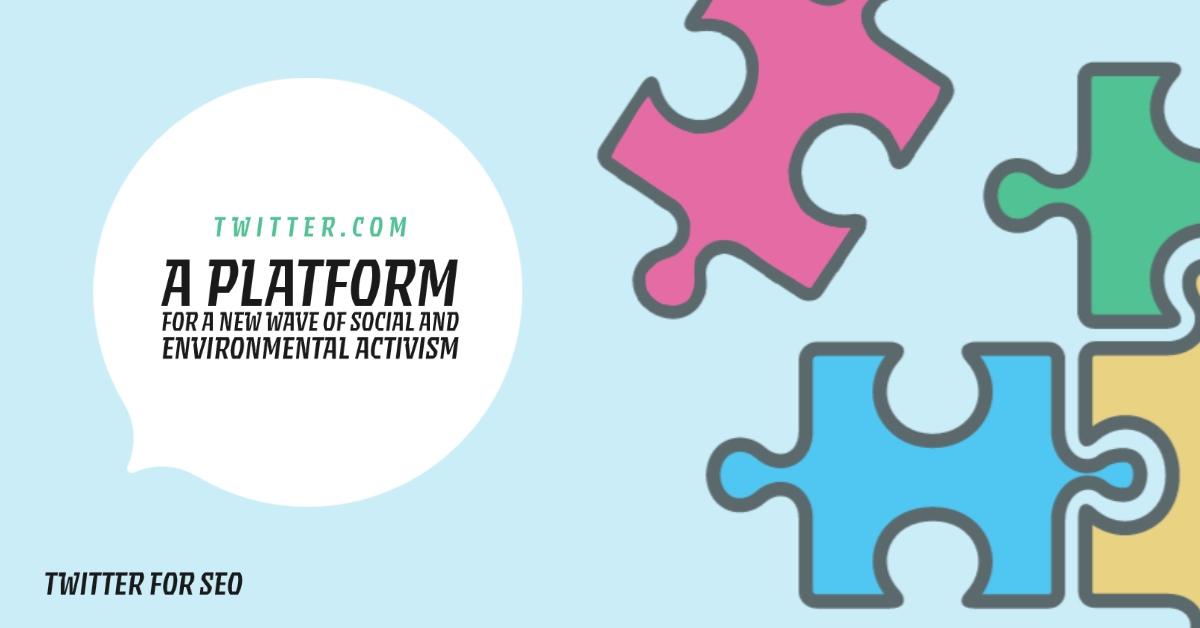 "Twitter has provided a platform for a new wave of social and environmental activism, and provides an opportunity for brands to do purpose-driven advertising."

Twitter describes itself on twitter.com as "a platform for a new wave of social and environmental activism". So how can an SEO (Search Engine Optimisation) best make use of this platform?

Using Twitter as an "Activist" to get the Network Effect

If Twitter is an "activist platform" and not merely about telling people what you had for breakfast (i.e.mundane self-referencing, self-promotional content), to gain the best SEO response from Twitter you need to use it as an activist would.

Twitter is often regarded as an "echo chamber" or to quote the late media mogul, Kerry Packer, "this is not a democracy son".

For Twitter to generate the network effect with the aim of getting a large number of clicks, your followers are important. Other Twitter users who regularly follow and retweet your tweets are therefore very important. Hence reciprocating and rewarding (retweeting) good content by others makes sense.

According to Dr Tim Dean philosopher and author of: How We Became Human - and why we need to change -:

"If you want to create a communications platform that was built for bad discourse, you could not do better than to build Twitter."

Dean maintains that Twitter's inadequacies are based on the following limitations:

In an ABC program All in the Mind How we make up our minds the following conversation snippets relating to Twitter and social media were analysed by Dean-:

Dr Tim Dean: The second thing is all of the reward mechanisms in not just Twitter but other kinds of social media. They're based around engagement, not quality. And there's a lot of evidence to show that if you post a tweet with a lot of emotion and mobilize outrage and disgust you get more ‘likes’, you'll get more shares than you will if you post a more kind or considered tweet.

And why it's happening is... because one of the other theories that we have evolved is this propensity for outrage and outrage is a really important moral emotion because outrage, what is outrage? Right? Outrage is not just that we get angry, we get angry at all sorts of things like you know, you bang your thumb when you're having to get angry or whatever. It's, you get angry at injustice, at a harm and what's really interesting about our species, like some primates experience anger, and outrage, but we are the only species that gets angry when someone we don't know and have no relationship with and no connection to does something bad to someone else we don't know and have no relationship to. We can just be independent onlookers who are not affected by this at all or we can get really pissed off when something happens.

And this was a really important device for our ancestors to regulate behavior in small scale societies.
Social media is the perfect storm, it taps into these incredibly powerful ancient emotions and heuristics and then feeds these engagement reward mechanisms which makes plenty of money for the social media companies. And we are left mad, powerless and just exhausted.

Professor Muireann Irish Cognitive Neuropsychologist: It is playing along to our fundamental reward circuits in the brain and so these are regions that are very important evolutionary structure are in the Striatum, which is inside your brain and it has connections forward into your frontal lobes where you make decisions. And so when something pleasurable happens to you, this Striatum will, you know fire up and go oh, yes. Dopamine receptors circulate, you start to feel really good. And so with social media, it's interesting in that all of the concepts that Tim [Dr Tim Dean] was saying about feeling negative and you want to do something, it is inherently rewarding, but possibly not in such a positive way. But still, you're trying to find a way to sort of work and act on this very sort of primed evolutionary response to be highly engaging scenarios. And so you can see if people get lost in today's the way that they get really dependent on the sort of validation and gratification that we're seeing from those social arenas, it becomes like their outlet, particularly in the pandemic [Covid 19], when actual social contact was sort of, you know, prohibited.

Sana Qadar: Yes. Are we doing long term damage to how we think through social media. Like social media changing how we make up our minds and how quickly we do so?

Professor Muireann Irish Cognitive Neuropsychologist: I think so. Absolutely. And I think what's interesting is just how much misinformation is sort of promulgated through social media and how quickly people are to want to believe us and I think a lot of that came about, again, during the pandemic, when maybe your usual networks were cut off, and people were trying to make decisions about vaccination and you know, whether to wear masks all of this kind of thing. And trusting the trusted source may not necessarily be the scientific source or the objective data, but friends and so on, like I had a friend contacted me asking should she get vaccinated and saying that her friendship group is going to basically cut her out on social media if she did, because they had read research, you know, by some discredited person, or by the fact of vaccination and so it's just interesting, the way in which we will again make decision based on our reference group and maybe discount then possibly more plausible or objective sources of evidence because of the fear of falling out of the in group.

Damien Cave: A really interesting example of another bias that we have, which is we are social and communal creatures by nature. In a lot of contexts, truth is usually less important than relationships. There's a lot of evidence to show that if you drop people into a room full of actors who all believe that it's ridiculous and outrageous, it doesn't take long for the subject who's dropped into that space to start believing that as well as expressing that and once they express it to conform, then they start to kind of find ways to justify that to themselves, and they start to find ways to believe it.

With the aim of using Twitter to advance SEO we are taping in to these ancient evolutionary mechanisms eloquently discussed above. It may be that those commentators are not necessarily active Twitter users. People regularly on Twitter are often aware of the inherent biases, and the constant outrage of what can be called an "echo chamber". A typical example of this is political commentary - on Twitter this is anything but truly representative of the wider population. However, many users are aware or become aware of the political biases represented on Twitter, because we have public elections with results that rarely reflect the Twitter discourse. Understanding the obvious biases on Twitter will improve SEO opportunities - you will know what to write and what pics to post. You will know which buttons to push because the response can be instant - you are not writing a letter to the Queen. Twitter is a direct link to many people you would never in the normal course of the day have direct access to, or at least to their social media handlers in some cases.

So let's look at how to construct a tweet for the goal of getting it retweeted and clicked.

Construct your hashtags, keywords, images (1 or 2) and a link (optional - good for SEO) to give the best chance of being retweeted. Below is Twitter analytics of a successful tweet from activist group @SaveOurSpit related to the topic separation of church and state and specifically related to a topical issue on the Gold Coast. The image used on this tweet and the call to action (click the link to the ABC article) combine well.

Link to your profile

In Twitter your "Real Name" does not need to be your actual name. Your Username should also count. Our Twitter Username is @goldcoastlogin which is a good name for a Gold Coast based SEO and Web Developer. The bio reads -: Web Developer - Video - SEO - working hard to develop passive income with SEO. It is best to stay on topic as much as possible.

Link to your profile everywhere you can, and do so with strong keywords in the anchor text.

Twitter uses the "nofollow" tag in links (does not pass on SEO value) however Google is sophisticated in that a strong social media presence is always a benefit to SEO. The same applies to links you place in YouTube videos description, these too have value from an SEO perspective. Google wants to reward genuinely popular content.

How Google measure's your activity

Twitter provides instant market research for your ideas. Where else can you use a hashtag that puts your information in front of everyone on the same platform? Your information can go in front of those interested in politics by using the #AusPol tag in your tweet. You can instantly test ideas and judge the response almost immediately. Then if there is a response you can expand on your idea (blog).

We created a blog about Regex for SEO and guess where the images were indexed first? From our Tweet about the article. Notice it mentions 4 days ago, and as of writing the page had not yet been indexed in Google - the tweet was.

If Google can index the tweet image so quickly, should you then use a different image than is on the page? More on this when we find the answer to that.

More on this to come after further exploring the potential of Twitter "as a new wave of social and environmental activism" to generate the network effect.